Shares in the Tencent-backed fashion and lifestyle platform were trading down 9 percent, at $12.75 apiece, on the afternoon of its debut day. Mogu Inc. (NYSE: MOGU) stumbled on liftoff today, tumbling below its $14 per share offering price after ringing the opening bell on Wall Street.

The Chinese fashion retail platform, backed by Chinese tech giant Tencent Holdings Ltd. (HKEX: 0700), was trading at $12.75 per American depositary share by Thursday afternoon. It raised $66.5 million in its initial public offering today, having priced its shares at the low end of the announced range of $14 to $16 per share. That valued Mogu at $1.3 billion. 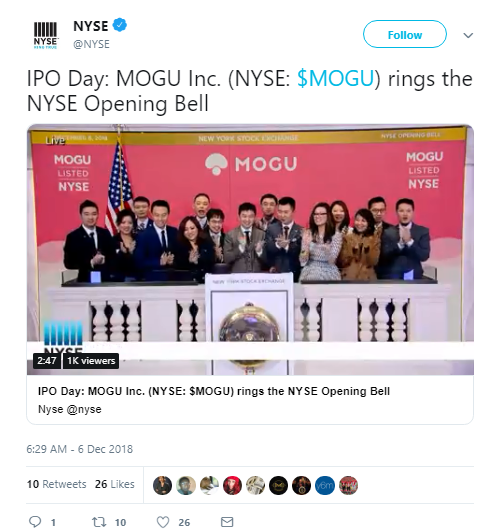 Mogu at the opening bell ceremony on the New York Stock Exchange Thursday.

Shares in the company were trading down 9 percent, at $12.75 apiece, by the afternoon.

The IPO was a big decline from $200 million which Mogu, previously known as Meili, targeted in a filing earlier this month. Furthermore, in July, the company aimed for an IPO of $500 million in a confidential filing, according to Caixin Global.

Hong Kong-listed conglomerate Tencent holds an 18 percent stake in Mogu, which in its early days rejected an investment offer from e-commerce giant Alibaba Holdings Ltd. (NYSE: BABA), according to TechCrunch.

Tencent, a tech and gaming giant, does not directly operate in e-commerce, but holds equity in a few major players, including Pinduoduo Inc. (Nasdaq: PDD) and JD.com Inc. (Nasdaq: JD). It connected with Mogu after the latter acquired Meili, in which Tencent was an investor.

The IPO was originally scheduled for Wednesday but was postponed as the U.S. stock markets were closed yesterday for the memorial services of former President George H. W. Bush.