The clinical-stage cancer therapy developer is working with Johnson & Johnson on its lead CAR-T candidate.

Clinical-stage biopharma company Legend Biotech Corp., a spin-off of GenScript Biotech (HKEX: 1548), seeks a U.S. listing of up to $100 million.

Headquartered in Somerset, New Jersey, Legend Bio operates in the United States, China, and Europe, focused on the discovery and development of cell therapies for oncology. 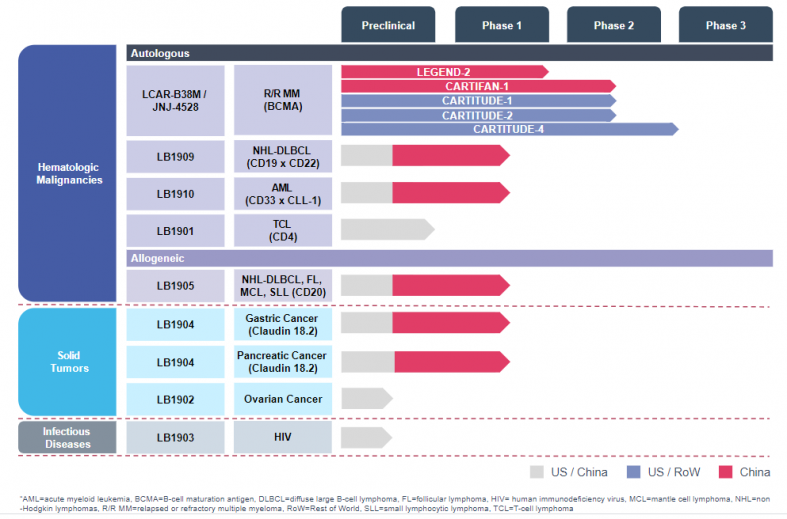 Legend Bio is developing its lead CAR-T cell therapy in partnership with Janssen Biotech, Inc. The candidate, LCAR-B38M/JNJ-4528, "has the potential to deliver deep and durable anti-tumor responses in relapsed and refractory multiple myeloma, or RRMM, patients with a manageable safety profile," Legend Bio wrote in its prospectus filed Wednesday. It is conducting Phase 1 trial in China and Phase 1b/2 registrational trial in the U.S. and Japan. And while it expects to get approval of the drug in the near-term, complications in the form of cytokine release syndrome (CRS), sometimes deadly, could occur, as is common with cell therapies.

With Johnson & Johnson-owned Janssen, Legend Bio is equally sharing the development, production, and commercialization costs and profits or losses except those in Greater China, where Legend assumed 70% of the same. The company received an upfront $350 million payment from Janssen, in addition to four milestone payments totaling $110 million.

Legend Bio said it intends to use the proceeds from the offering in New York for the clinical development of its lead therapy candidate, as well as for the manufacturing facilities and commercial launch of the product if approved. The remaining amounts will be used for other pipeline programs and general corporate use, according to the filing.

Prior to the offering, Hong Kong-listed GenScript Biotech held 76.9% equity in Legend Bio.

Legend Bio has applied to become publicly traded on the Nasdaq Global Market under the ticker symbol "LEGN." The exact offering amount is yet to be determined.