Jesse Fried, professor of law at Harvard Law School, weighs in with CapitalWatch. 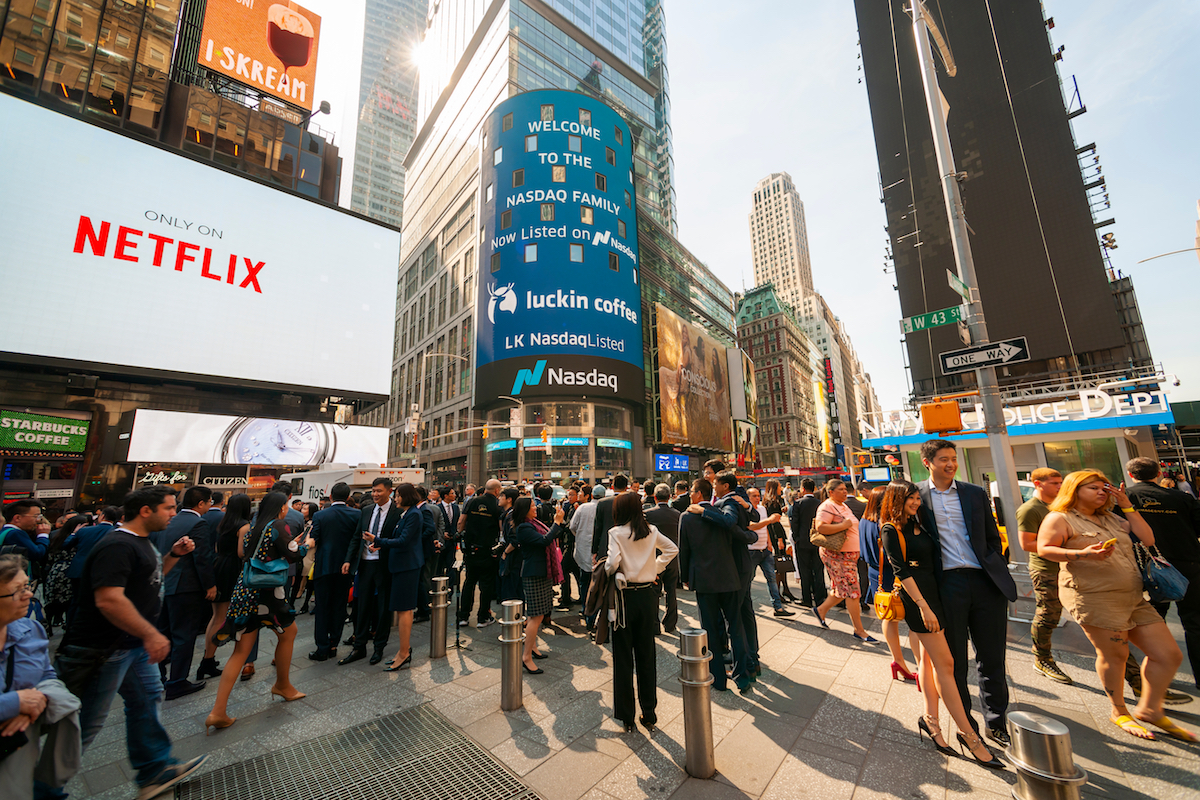 As the U.S. looks to crack down on Chinese companies with public listings on its exchanges, firms are being fed buyout proposals.

Amid the pandemic, Sino-U.S. trade tensions have been picking up smoke, as President Trump has been blasting China for its lack of transparency on Covid-19. The other issue has been over the beverage maker Luckin Coffee Inc. (Nasdaq: LK) after the company allegedly fabricated $314 million in sales. The Chinese rival to Starbucks (Nasdaq: SBUX) has not only been halted from trading but now faces delisting from Nasdaq.

The Luckin Scandal Could be the Last

In May, the U.S. passed a bill that could delist around 800 Chinese listed firms on American bourses, according to Bloomberg.

"I commend our Senate counterparts for moving to address this critical issue," Representative Brad Sherman, a California Democrat on the House Financial Services Committee said.

He added, "Had this legislation already been signed into law, U.S. investors in Luckin Coffee likely would have avoided billions of dollars in losses."

But that isn't all American investors need to worry about. With potential delistings on the way, some companies are looking at privatizations. The good news for investors is typically when a company is bought out, private bidders usually offer a premium on the current market values of shares. However, according to Yahoo Finance, U.S.-listed Chinese companies have used American investors just to take the company private and list back home at a far higher valuation.

"They're just trying to squeeze every last drop of blood out of U.S. shareholders and then go on and relist and do a new IPO in Chinese markets for three times or five times the transaction price in the U.S," Peter Halesworth, manager for Heng Ren Partners, and an avid investor in Chinese firms told Yahoo Finance in March 2019.

He continued "It's the ultimate insult at the end of the process."

At the time of the report in March 2019, 60 companies had gone private since 2013. Jesse Fried, a professor of law at the Harvard Law School, told CapitalWatch last week that if the delisting bill becomes a law, "stock prices for Chinese firms trading in the United States are likely to decline," which makes "buy-out proposals more appealing to Chinese controllers and increasing buyout deals."

He also noted that firms trading on American bourses need to follow the laws, regardless if they are from China, Germany, or the U.S.

"We can't let a subset of listed firms, those based in China, refuse to comply. That could end up undermining the integrity of our market, and investors' confidence in it," Fried said.

In the last month, several Chinese companies have been weighing buyout offers and others turning private. Many Chinese firms with U.S. listings have taken advantage of American investors, causing some serious losses.

Chinese Firms That Have Gone Private

One that has been taken private is SORL Auto Parts Inc., formerly traded on Nasdaq's exchange under the ticker "SORL".  The maker of auto brakes systems completed its merger to become a wholly-owned subsidiary with Ruili Group Co. Ltd. for $4.72 per share. In November 2005, SORL market capitalization was $106.18 million, as compared to $91.12 million in 2020.

In April, the online media provider Sohu.com Ltd. (Nasdaq: SOHU) took its online gaming entity Changyou private, at $579 million equity value in April. Under the deal, the company said shareholders would receive $10.80 in cash for each share.

That said, it hasn't been a fun ride if you were a shareholder from the start. In the year of Changyou's IPO in 2009, shareholders watched its stock hit a high of $48.37 per share but tumbled nearly 78% from that mark compared to its final closing in April with its market cap sitting at $575.74 million.

Turning towards Sohu, its performance has also suffered. Publicly traded on Nasdaq since 2000, shareholders watched its stock trade in the $100 to $110 per share range in 2011. However, since then, Sohu hasn't even come close to those levels as its market cap has dropped below $370 million. Investors will want to think twice about this company. The bill, if signed by President Trump would likely force it into privatization if it hadn't been making plans to do so already.

Chinese Firms That Will Go Private

Demand to go private is picking up steam, with several Chinese companies accepting deals this month.

One of the latest to enter a deal to be taken private was China's largest online marketplace for classifieds 58.com Inc. (NYSE: WUBA). Under the agreement, stockholders in the Beijing-based company will receive $56 for share, representing a premium of around 20% from the first buyout proposal offered to the company in April.

If you were a shareholder in 58.com since Day One, you made some money, as the company has far passed its IPO issue price of $17 per share in October 2013. However, the same can't be said if you bought the stock over the past couple of years. The company hit a trading high of $89.90 per share in May 2018; today, its stock trades mostly in the $49 to $55 per share range.

Bitauto's stock traded as high as $97.45 per share in November 2014 but is now down nearly 84% since. It currently barely trades above its IPO issue price of $12 per share.

It's also important to note that multiple law firms are investigating Bitauto and 58.com in regards to whether or not the mergers are "fair" to shareholders. That is something investors will want to keep an eye on, as both private deals are expected to close in the second half of the year.

Another company that recently agreed to be taken private is the chemical company China XD Plastics Co. Ltd. (Nasdaq: CXDC).

Last week, the Harbin-headquartered company agreed to a buyout deal and a merger with Faith Dawn Ltd. and Faith Horizon Inc. Pursuant to the deal, Faith Dawn will acquire all the outstanding shares of China Plastics for a cash consideration of $1.20 per share.

Like Bitauto and 58.com, China XD is facing lawsuits from multiple legal firms to determine whether the buyout is fair to shareholders. In 2009, China XD completed a reverse merger to become publicly traded in the U.S.  In June 2014, China XD carried a trading high of $13.24 per share, but shareholders have suffered significantly high losses. The stock is now down more than 90% to date. The company has also traded under $1 per share several times this year for which, among other issues, has been in noncompliance with Nasdaq.

As we wait to see if the bill gets to President Trump, some other Chinese U.S. listed companies have been mulling buyout proposals.

One of those companies is cloud-based big-data analytics provider Gridsum Holding (Nasdaq: GSUM), which received a buyout offer from its chairman Guosheng Qi, its chief operating officer Guofa Yu, and their respective affiliated entities, for $2 per share. The Beijing-based company, the stock in which continues to slide in the last several years, previously received a higher offer from a consortium, headed by Qi and Yu at $3.80 per share, but at the time was trading around $3 per share.

If you thought shareholders in China XD have had it rough, it's been even rougher for Gridsum investors. In September 2016, the company sold 6.7 million shares at $13, raising $87 million in its IPO. Now the company sits nearly 94% down from its offering price and faces a possible delisting from Nasdaq for not complying with the stock market's minimum bid price of $1 per share.

In 2019, Gridsum generated $19.8 million in revenues, up 30% year-over-year on a net loss of $77.12 million. In its financial report, Gridsum said its special committee was evaluating the proposal as well as other alternative transactions.

"There can be no assurance that any definitive offer will be made, that any agreement will be executed, or that this or any other transaction will be approved or consummated," the company said.

Another firm weighing a buyout deal is China Distance Education Holdings Ltd. (NYSE: DL).  The Bejing-based educator is reviewing a buyout offer from the company's executives to acquire all outstanding shares for $9.08 each.

In the second quarter of fiscal 2020, China Distance said its revenue improved 8% year-over-year to $41.9 million and turned profitable on a net income of $4.3 million.

Shanghai-based Yintech received a non-binding proposal from the management team to acquire the remaining shares at a purchase price of $6.80 per share.

Meanwhile, Guilan Jiang, the founder, and chairwoman of Fuling, together with her family members and investor Qijun Huang have proposed to acquire all of the outstanding ordinary shares of the company for $2.18 per share.

Not to single out Chinese firms trading on U.S. bourses; but the common trend appears to be that they either significantly underperform immediately after the IPO, or their shares peak years after that, only to suffer a precipitous fall.

Despite suffering a brief hiccup in 2018, when JD's CEO Richard Liu was arrested on allegations of rape in Minneapolis, the company's stock has taken off since the beginning of 2019. Shares of JD have surged 189% since.

Alibaba, which raised $25 billion in the world's now second-largest listing in 2014, has fared even better. Shares in Alibaba, now trading around $220 apiece, have skyrocketed from its IPO price of $68. NetEase has also increased its value significantly. Since implementing a reverse stock split in 2006, shares of NetEase are up a whopping 1667% to date. Noteworthy, all three of these companies have completed their secondary listings in Hong Kong within the last year.

But for every Alibaba, there is a Luckin Coffee. Part of the problem is Chinese companies have not been required to have their audits inspected, also known as PCAOB inspections. But if the bill becomes a law, you can bet the U.S. will mandate PCAOB inspections for Chinese firms. However, the question is will China allow them, and the Harvard professor is skeptical that they will.

Fried said that if the bill becomes a law and China "does not back down on PCAOB inspections," he believes that they will be "forced to delist."

The biggest loser, if this happens, will be U.S. stock exchanges and investment banks. According to a Bloomberg report, the NYSE and Nasdaq would lose millions of dollars in fees that Chinese firms pay to be listed on their bourses.

While U.S. exchanges have been an attractive draw for Chinese firms, they do not seem to be adverse to turning to other markets should they not comply with the new rules. In efforts to attract more listings, Hong Kong has been seeking to modernize its exchange.

This is not the outcome that U.S. stock exchanges or Chinese firms want.

"It is important for the U.S. and China to come to an agreement on these issues." Tom Quaadman, the executive vice president of the chamber's Center for Capital Markets Competitiveness, said.

American investors should express caution when looking at Chinese U.S. listed firms, especially now with added trade tensions and a variety of unknowns. Fried said he would not "buy shares in any Chinese company trading in the United States," because they can violate the U.S. Securities Law and Cayman Corporate Law without any "fear of real punishment".

So, when it comes to Chinese-U.S-listed stocks, the old adage "buyer beware" definitely applies. That said, China and Chinese companies are here to stay and will continue to play a large role in the world markets. American investors need a way to play China's rise while avoiding so many of the pitfalls.