Do Jobless Claims Point to Sluggish Recovery and Accelerating Gold?

Jobless claims paint a much grimmer picture than other aspects of the economic data. 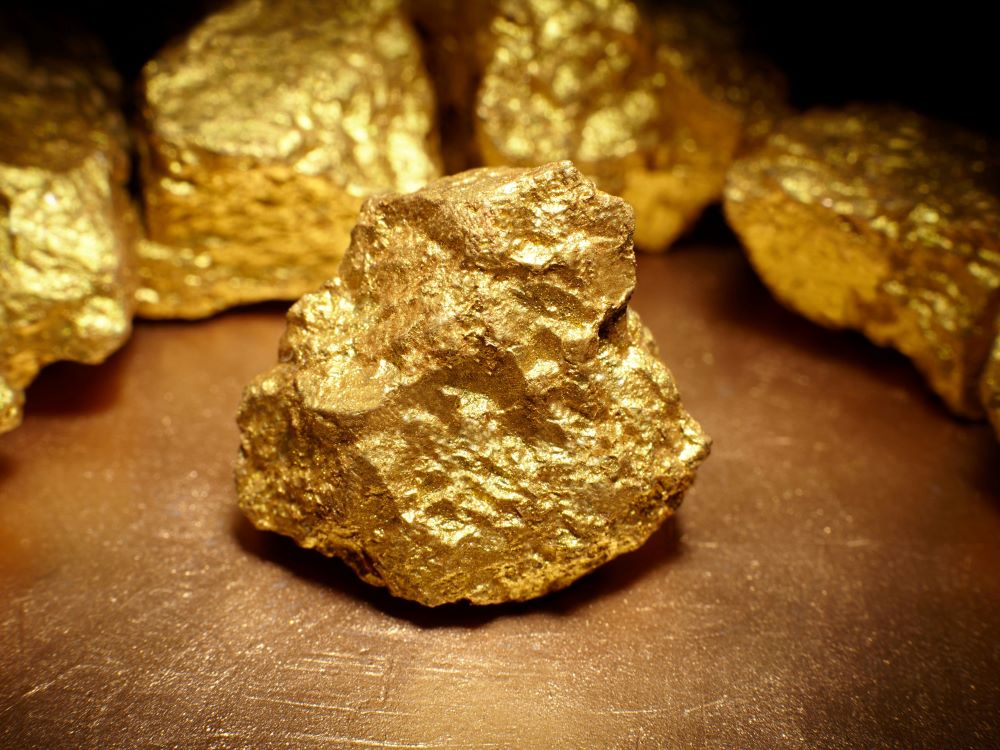 Jobless claims paint a much grimmer picture than other pieces of economic data. So, the Fed (and other central banks) will remain dovish for years, which should support gold prices.

More and more economic reports show the beginning of the economic recovery in the U.S. Following the retail sales earlier last week, the Philly Fed Manufacturing Index turned from negative 43.1 in May to positive 27.5 in June, the first positive reading since February. And the Leading Economic Index rose 2.8 percent in May, after a record plunge in the two prior months.

However, the initial jobless claims paint a much grimmer picture. They amounted to 1.5 million in the week from June 6 to June 13, as the chart below shows. While the number of Americans who applied for unemployment benefits has been systematically declining since late March, the number of people who applied for receiving jobless benefits barely fell from 1.56 million in the previous week.

Indeed, although initial claims are slowly falling back toward a pre-pandemic normal level, it is taking an agonizingly long time. Despite the surprisingly positive May nonfarm payrolls, the initial claims suggest that there is no quick recovery in the U.S. labor market.

The continuing claims, which count the number of people who have already filed for initial claims and who have experienced a week of unemployment, and then filed a continued claim for benefits for that week of unemployment, also show a frustratingly slow rebound in the U.S. employment. As one can see in the chart below, the number peaked at nearly 25 million in May, barely declining to 20.5 last week. 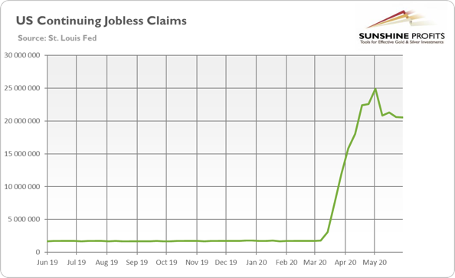 The potential explanation is that there is the second wave of layoffs, which keeps the number elevated, hampering the pace of economic recovery. Hence, investors should take with a pinch of salt the unemployment rate having fallen to 13.3 percent in May to reflect the true state of the U.S. labor market. Reality is much worse – which is actually good news for the gold market.

On Wednesday, Powell testified for the second straight day to Congress. He reiterated his previously stated views – in particular, Powell reemphasized that the Fed will not hike interest rates for years: "We're thinking that this economy is going to need support from monetary policy for an extended period of time," he said.

It seems that the American central bankers are not worried about the potential inflation at all. In a recent speech at the Foreign Policy Association in New York, Richard Clarida, Fed Vice Chair, said that the coronavirus crisis will be disinflationary, not inflationary:

while the COVID-19 shock is disrupting both aggregate demand and supply, the net effect, I believe, will be for aggregate demand to decline relative to aggregate supply, both in the near term and over the medium term. If so, downward pressure on PCE (personal consumption expenditures) inflation, which was already running somewhat below our 2 percent objective when the downturn began in March, will continue.

Given Clarida's prominence, it seems that the Fed will be indeed very dovish for years, which should support the gold prices.

But not only the Fed. In June, the ECB expanded its emergency program in size and duration. The Pandemic Emergency Purchase Program will be increased by €600 billion to a total of €1,350 billion and it will be extended until at least the end of June 2021. Similarly, the Bank of Japan increased the nominal size of its aid for businesses struggling because of the pandemic from about $700 billion to $1 trillion.

What does it all mean for the gold market? The low inflation and still very harsh situation in the U.S. labor market imply that the Fed will remain very accommodative for years to come. The same applies to the Bank of Japan and the ECB. The rising central banks' balance sheets and the ZIRP should support gold prices. However, the flush of liquidity may also boost risky assets, while the dovish ECB's monetary policy could weaken the euro and gold against the U.S. dollar.

If you enjoyed today's free gold report, we invite you to check out our premium services. We provide much more detailed fundamental analyses of the gold market in our monthly Gold Market Overview reports and we provide daily Gold & Silver Trading Alerts with clear buy and sell signals. In order to enjoy our gold analyses in their full scope, we invite you to subscribe today. If you're not ready to subscribe yet though and are not on our gold mailing list yet, we urge you to sign up. It's free and if you don't like it, you can easily unsubscribe. Sign up today!