Now shifted to the OTC market, Luckin promises to have made significant internal changes. 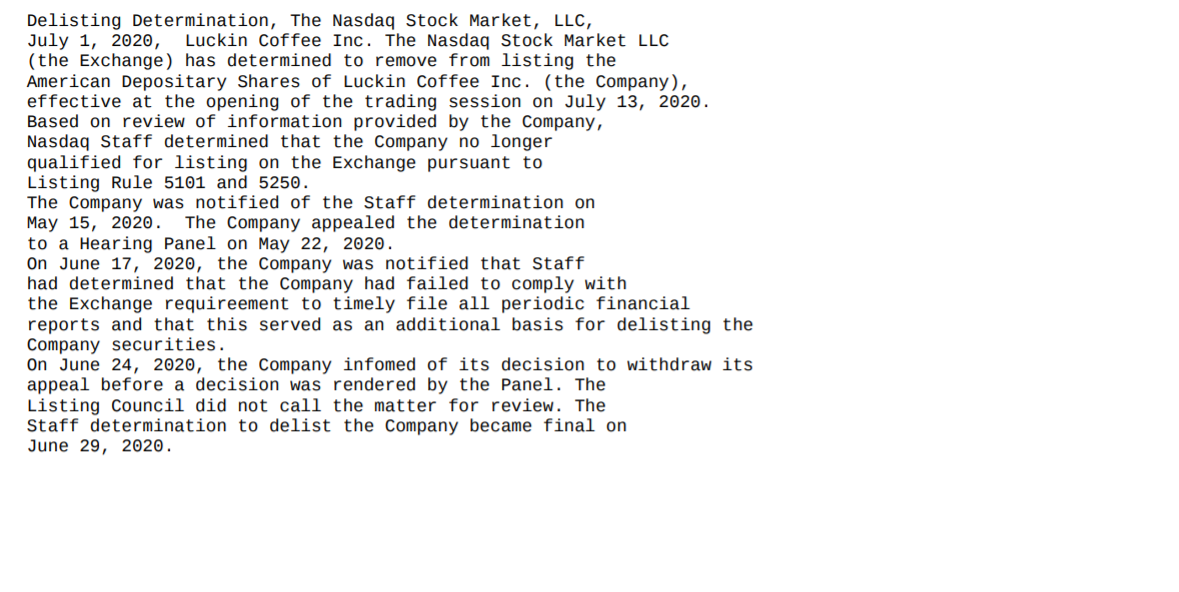 China's Luckin Coffee Inc., as of Monday delisted from the Nasdaq and now traded over-the-counter as "LKNCY," has released a statement Wednesday saying it has completed its independent internal investigation. The coffee giant, once believed to be a challenger to Starbucks (Nasdaq: SBUX), hopes to get a second chance in the hearts and minds and wallets of investors.

The special committee, formed in March after the allegations of fraud posed in an anonymous report published by Muddy Waters Research, found that the fabrication of sales began as early as April 2019. It also confirmed that the sales last year were overstated by 2.12 billion. In addition, Luckin's costs and expenses were inflated by 1.34 billion yuan, according to the statement.

Luckin said the investigation involved the review of 550,000 documents collected from 60 custodians and interviews of 60 witnesses, as well as forensic accounting and data analytics testing.

It also confirmed that Luckin's former chief executive, Jenny Zhiya Qian, and former chief operating officer, Jian Liu, as well as a number of employees reporting to them, participated in the fraud. The two were given the boot in May.

Further, Luckin's board has decided to terminate its former chairman, Charles Zhengyao Lu. The company plans to decide his fate at its meeting on Thursday.

A serial entrepreneur and angel investor, Lu had earlier issued a public apology, saying, "I have been in deep pain and guilt over the past month. I again apologize to all the investors, staff and clients of Luckin for the terrible impact of the incident."

In early June, however, news surfaced that Lu may face criminal charges as investigators found emails "in which he instructed colleagues to commit fraud." Lu has been fighting lenders in courts and has lost two holdings, with his family trust also under threat. Earlier, he had resigned from Car Inc., China's largest rental car company.

Further, Luckin said today that an additional 12 employees, including a number of those who were previously suspended on suspected involvement in the fabrication of sales, have also been sacked. The company will also terminate its partnerships with third parties involved in the fraud.

The Nasdaq run of the once-heralded Chinese company has ended, and U.S. investors will have to wait and see if it can rise again from ashes. From raising $651 million in its offering in May 2019 to trading above $50 per share in January to today's bitter announcement, Luckin has become the epitome of a good trade gone bad, the poster child for a corrupt China in the minds of the now wrathful SEC and equally livid D.C. lawmakers.

However, if the company manages to deal with its piling debt and starts to cut its losses, it may yet challenge Starbucks in China. Though it has recently closed about 800 coffee shops. with 6,020 as of early June, according to Thinknum, it still outnumbers the American giant. People will likely still buy their coffee. Their stock, however, is another matter.

Wednesday afternoon, shares in the Luckin soared 18%, at $2.76 per American depositary share, on the OTC market.

Luckin has yet to file its 2019 annual report.