The LGBTQ+ dating-app company, which soared 124% today, may singlehandedly change the perception of China and its companies for the better. 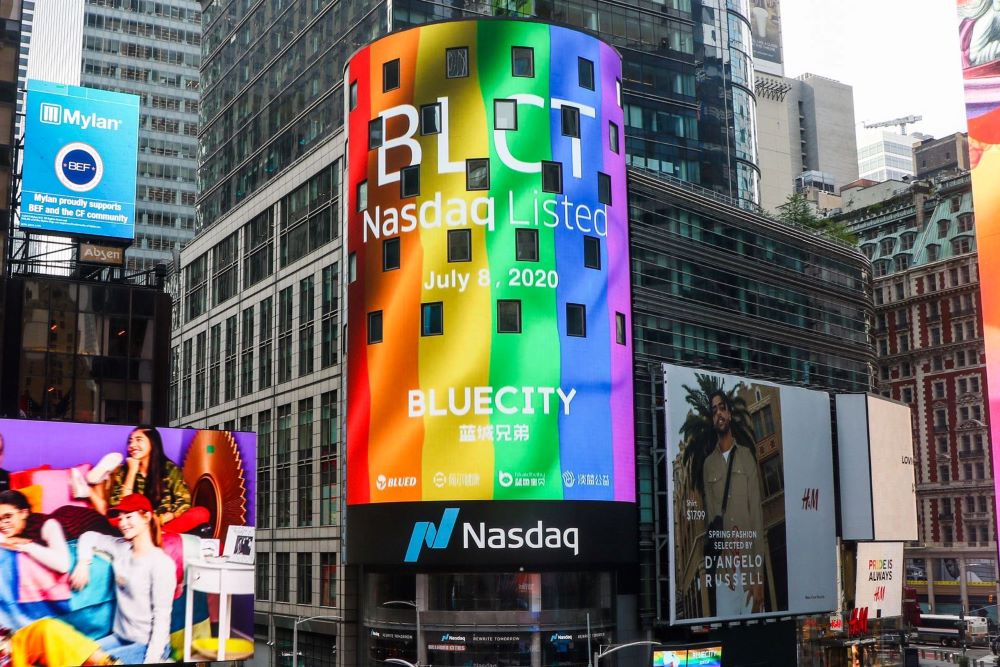 BlueCity Holdings (Nasdaq: BLCT) soared its public trading debut Wednesday, raising $84.8 million in advancing toward its global vision. The stock of the Chinese LGBTQ community platform had more than doubled from the issue price of $16 to $35.89 per American depositary share soon after takeoff.

"It's a huge milestone for us and the global LGBTQ+ community that we proudly represent," BlueCity's chief financial officer, Ben Li, told CapitalWatch in a phone interview on IPO day.

In addition to social interaction and entertainment, Blued offers services including HIV awareness and prevention, medical consultation and health services, as well as family planning, to LGBTQ individuals.

And going global is Blued's top milestone. Already, the app is the largest LGBTQ community in China, India, Korea, Thailand, and Vietnam and has users in more than 210 countries and regions. When last week New Delhi blacklisted 59 apps, including China's top social apps TikTok, Weibo, and WeChat on concerns over user data security, Blued was not among them.

Asked about expanding in the United States, Li said, "U.S. is a very compelling market, but we are still in an early stage in exploring it."

He added, "Because our current users have similar social, entertainment and health-related interests across regions, we can leverage our branding, product expertise and user insights to help us scale globally."

In the United States, Blued will face competition from Grindr, which last month was forced by Washington to transfer ownership from China's Kunlun Tech to a local business. In addition to the U.S., Grindr's main user base is in Canada, United Kingdom and Australia.

Today, the majority of Blued users are male, but BlueCity said in its filing with the U.S. Securities and Exchange Commission that it intends to acquire a "leading location-based social networking mobile app targeting the lesbian community." The company also said it is well-fit to provide for various needs of different subgroups of the LGBTQ population and plans to broaden its services to accommodate them, which will in turn drive the monetization.

The fast-growing platform has maintained strong performance during the first quarter – while some firms were hard-hit by the Covid-19 outbreak, mobile-based platforms like Blued continued growing. BlueCity reported increased revenues of $29.3 million on narrowed losses of $1.1 million. For 2019, it posted revenues of $107.2 million, up 51% year-over-year. Net loss decreased 63% to $7.5 million last year, according to the prospectus.

Further, CFO Li said, "Livestreaming is our primary revenue source, but it is getting smaller as a percentage of overall revenue as we diversify our revenue stream through advertising, membership fees, and other sources."

Indeed, revenues from membership services at BlueCity rose 391% year-over-year to $2.1 million in the first quarter. As of March, BlueCity boasted to serve more than 49 million registered users and had 6 million average monthly active users (MAUs). Overseas users made up 49% of total MAUs in March.

BlueCity plans to attract more "high-quality" influencers and offer more premium content, as well as increase its ads revenue segment. Further, it intends to increase its monetization streams outside China, where it now generates the vast majority of its revenues, according to the prospectus. 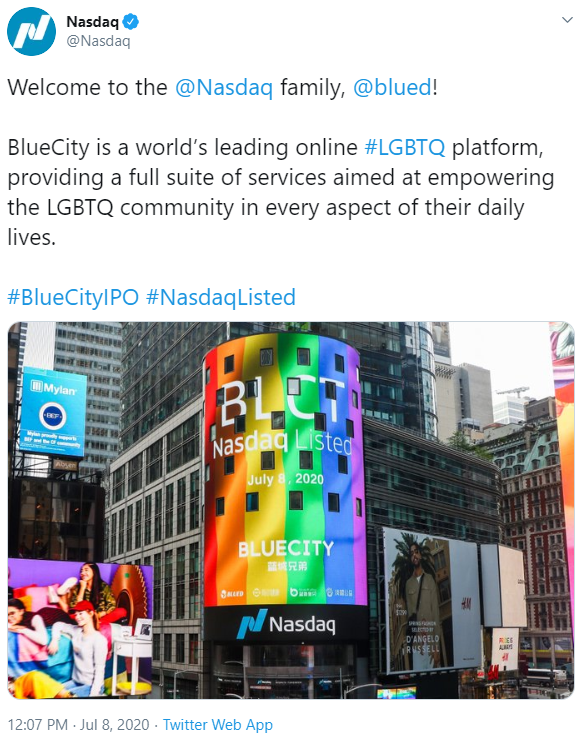 So, what's the next step? "We will continue to strengthen the layout of target business areas, focus on improving the efficiency of business development, and strive to improve revenue performance," Li said.

Globally, the online LGBTQ market, which includes consumer spending and marketing, was $261.5 billion in 2018, according to independent consultancy firm Frost & Sullivan Research. It expects the market to more than double to $580.4 billion by 2023, growing at a compound annual growth rate of 17.3%.

Commenting on competitors in the market, Li said, "There are other sites that offer social networking or other products, but we are differentiated by the size and deep level of engagement of our community and our proven ability to provide a breadth of relevant services that are tailored to them."

BlueCity said it plans to use the IPO capital for geographic expansion, technology and big data, and general corporate purposes.

Li told CapitalWatch, "We are capitalizing on both a global cultural moment and financial moment. Culturally, this is a significant milestone for the LGBTQ community in China and globally."

The company's founding story is striking. "Our story started in the year 2000, when our founder, Mr. Baoli Ma, a closeted policeman by the alias ‘Geng Le,' founded one of China's first and most influential LGBTQ online forums, Danlan.org," its prospectus states.

It goes on to say, "Homosexuality was removed from an official list of mental illness in China the next year."

BlueCity has publicly filed its preliminary prospectus just three weeks ago and has clearly enjoyed strong investor interest since then and on debut day.

"We embrace those who stand by us and help us grow and develop further," chairman and chief executive officer Ma said in a letter to investors as quoted in the prospectus. "Together, we will turn BlueCity into a beautiful rainbow over the capital markets."