Welcome to the Yang Gang. And all it took was a little global pandemic to be initiated. 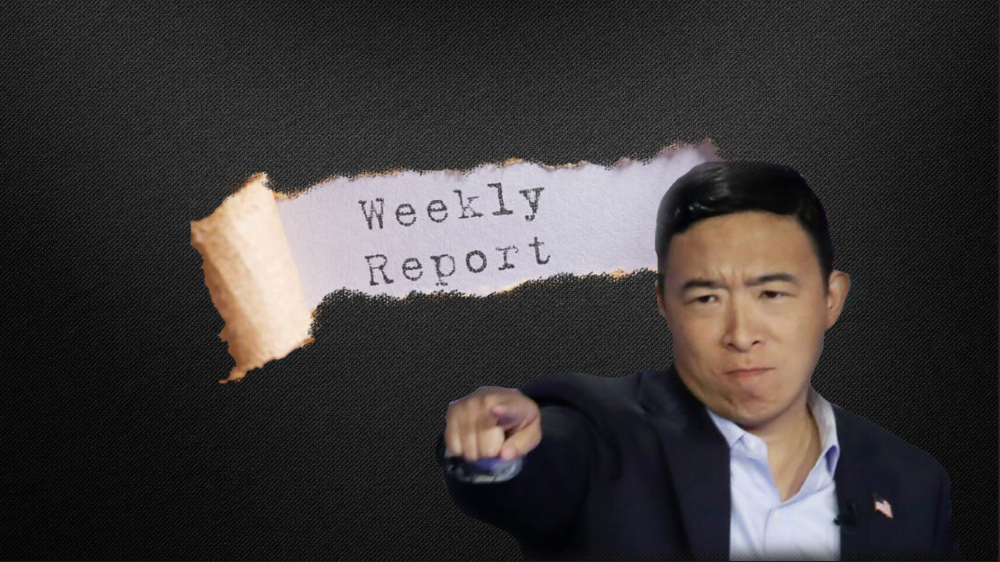 Barr. Bezos. Hearings. The Fed. Earnings. More earnings. Tweets from the president suggesting he will contest the election.

An overwhelming barrage of market-moving news this week.

Also, did you know Kodak is a pharmaceutical company? Neither did I. Well, they are now.

A Kodak moment to cherish for shareholders, the stock hit a high of $47 per share after a dismal year which saw the stock fall to $1.55 per share in March.

Kodak's picturesque rise was due to a $750 million loan from the Trump administration to make active pharmaceutical ingredients (API) so we don't have to rely on India and China. As the Middle Kingdom finds itself at the center of global controversy, this is a good idea. Spurred on by more than 63,000 Robinhood.com trades, Kodak is now one among the best-performing stocks, up 614% year to date.

But Kodak? Why not a pharmaceutical company? I have no clue. Maybe it's time for me to take another look at Canon to see how their vaccine is coming along.

In all seriousness, Canon (NYSE: CAJ) just hit a 5-year low and is in oversold territory. Even sans a vaccine candidate, it is a long-term buy.

Welcome to the Yang Gang

"We are all Keynesians now," conservative economist Milton Friedman once said, a quote whose later iteration "I am now Keynesian in Economics" was uttered by President Richard Nixon. Nixon reluctantly embraced interventionist policies after a career of railing against them.

Now, it turns out, we are not all Keynesians, we are all Yang Gangers. In a Verge article, Yang was called a "fringe candidate," often dubbed as the "candidate for the end of the world."  And while the end of the world isn't yet upon us, it took the emergence of a microscopic novel coronavirus for some to see the big picture. Once scoffed at by both the left and the right during his presidential run, Yang and his signature policy prescription, Universal Basic Income (UBI), suddenly don't sound so silly.

First proposed by the English radical Thomas Spence in the 18th century, UBI has found adherents as wide-ranging as the socialist-leaning civil rights leader Martin Luther King Jr. to the aforementioned conservative economist and the subject of many a Ted Cruz adolescent wet dream, Milton Friedman. Now, why would someone like Milton Friedman support such a government giveaway? Well, two main reasons: 1) Friedman saw the welfare state as a poverty trap, an entangled web of disincentives; and 2) Sending people checks directly avoids the perennially mismanaged, Byzantine bureaucracy.

We have been sold a meme our entire lives that not only will the kind of work we do serve as our salvation, but that work in and of itself (even terrible work) is somehow rewarding spiritually. Sounds good, until you enter the coal mine.

Even Bernie Sanders, the geriatric poster boy of  "socialism," criticized Yang's "Freedom Dividend" UBI proposal based on this a priori assumption about human nature.

Sanders, who's never really worked a job outside politics, said that "people want to work" and that the desire to "be a productive member of society" is a "very deeply ingrained feeling that people have."

Right. Tell that to my brother who makes more now playing video games than he did doing a job he hated. "Work will set you free?" Yeah, well, that's what the Nazis said at Auschwitz.

Mr. Sanders, the populist-turned-pop psychologist, has since changed his mind—for now, anyway. Turns out, people might not want to work the graveyard shift as a cashier, particularly if it means putting themselves in grave danger.

But most people hate their jobs, unsold on the idea that collecting money and putting it into a machine is anything other than Sisyphean, let alone spiritually satisfying. You don't have to be a populist or a pop psychologist to figure that out. (Being a cashier is the second most common job in the United States after "Retail Salesperson" more generally.)

This brings me to the forthcoming stimulus and the idiotic underlying belief to which the Democrats at least pretend to adhere—that unemployed people would work if they could even if they made the same or more money not working.

According to researchers at the University of Chicago's Becker Friedman Institute, 68% of persons who are eligible for Unemployment Insurance will make more money not working than they did working. And about 20% will make—wait for it—twice as much as they did while working.

Are we really to believe that these people would rather work than stay safely at home playing video games and escaping from the horror of their "professional" lives both before and during this scourge?

It is true that we need to do everything can right now to stave off disaster. The number of Americans filing new claims for state unemployment benefits totaled 1.43 million last week, the Labor Department reported Thursday; the drop in GDP in the second quarter was the second-worst in history, falling 9.3%.

Not only are stimulus checks and additional unemployment benefits critical today, but they are critical in perpetuity.

Conservatism is dead. Trump killed it long ago, and now Republicans find themselves even advocating for UBI, however temporary. There is no going back—and that is a good thing.

But $600? How can anyone insist it is sound policy to give someone unemployed more than they make when they were employed?

Republicans instead are calling for chintzy $200 per week in additional federal assistance for the unemployed as a temporary measure until the whole unemployment system is revamped, eventually providing the unemployed with 70% of their former earnings through a combination of state and federal help. From $600 to $200 is a massive drop, especially considering the circumstances. It is also political suicide.

But what is the right figure? $400? $350? It is hard to say, but it cannot stay at the $600-plus-state-benefits for everyone out of work. People cannot make more not working than working and be motivated to work.

That isn't Monetarism or Keynesianism or Communism or Capitalism: It is Idiotism.

There is a real chance now that, through the fog of this pandemic, even Republican voters will see the world through Yang's eyes. Let us not blow it by giving UBI (or added unemployment benefits) a bad name by divorcing these proposals from all common sense. This current half-hearted and overly generous iteration of UBI is not what Yang called for. For UBI to do the job it is meant to do (i.e. grow the economy from the bottom up) it must be permanent and supplemental, not interim and primary.

Yes, relief must be given right now. But if we do not do this smartly (or at least honestly) we run the risk of degrading the concept and the potentially permanent implementation of UBI. We need a long-term plan for UBI after the pandemic for nearly everyone, not just temporary disincentives for the unemployed supported by a privilege-based platitudinal romanticization of the American work ethic.

Ever wash dishes at a diner? I did, in high school. The first night I threw up in the sink after smelling the food I dug out of the drain. I was seen and fired on spot.

A Tale of Two Economies

As earnings this week showed us, we have two economies in this country which the virus has exposed and temporarily exacerbated.

Facebook, Amazon, Apple—all these stocks went up and took the Nasdaq along with it, while just about everything that wasn't tech or gold fell. Mid-term, these are the stocks to buy. Long-term, value is in big undervalued companies in sectors hard hit like aerospace and industrial and some now archaic-sounding tech names like Intel and IBM. But even longer term, it is back to these tech stocks once again.

So, if you are making more now unemployed than you did working, take that money and buy ROBO or BOTZ, two ETFs focused on artificial intelligence and automation, both of which are smart buys as they vie for robot ETF market dominance.

Just about everyone is now, reluctant or not, a Yang Ganger. We must make the right moves to ensure that membership will last not just through 2020, but through 2030 and beyond.

Okay, now back to work putting in this chart below and updating stock prices. Maybe if I painted the chart in oils instead it would be more fulfilling?  Next time, perhaps.

(Oh, BTW, my Robinhood.com foray into options has been fun. I made $600 this week. Not great, but sure beats working.)

Performance since Feb. 28. All stocks now sold and profit put into cash.

This index to be unchanged for the next three months additions, but no subtractions. Obviously, some companies are both good shorter and long term bets--like AMD.

(For more information on buy and sell signals in options and momentum plays on small-cap equities (like buying the dips in Zoom and Shopify--which you should do) email me at Gregory.bergman@capitalwatch.com.)