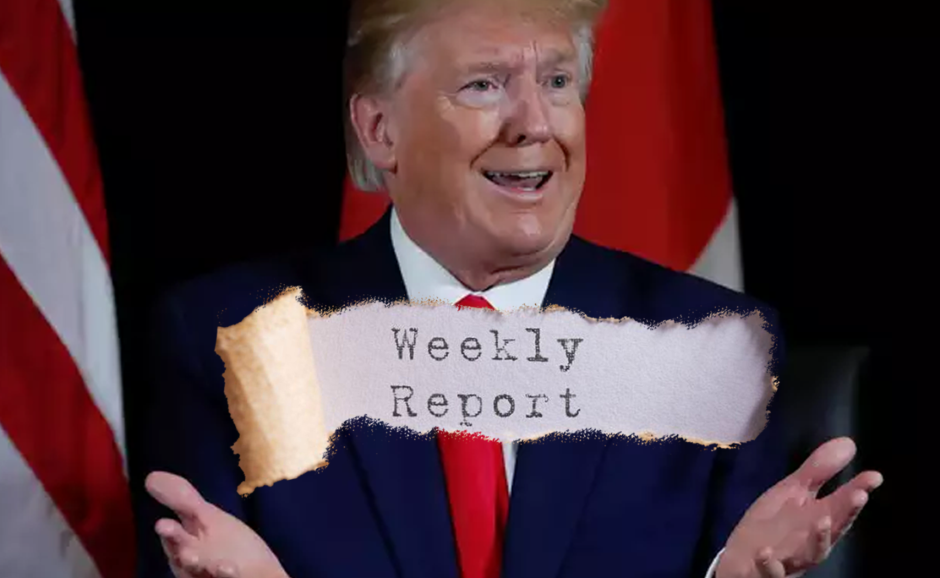 This is what President Trump had to say about the pandemic sweeping the nation and crippling the economy.

The interview last weekend with Axios during which Trump offered this pearl of wisdom might become the definitive interview of the president during his term. Trump is at the height of his "powers" in this "discussion," uniquely blending extreme candor and utter falsehoods as no other human being can. Never has his brand of authentic inauthenticity been so gloriously and grimly displayed.

Little known historical fact: President Franklin Roosevelt's famous quote from his iconic speech after the attack on Pearl Harbor was changed to "A day that will live in infamy" from "It is what it is."

So granted, "It is what it is" isn't exactly as inspiring as, "All we have to fear is fear itself."

But perhaps there is a grain of wisdom here that, if nothing else, somberly reflects the collective American surrender on a wide range of social, economic, and foreign policy challenges.

To be clear: For Trump, "It is what it is" expresses callousness but not surrender. Trump, while he loathes actual work, does not lazily throw in the towel, a fact which will be abundantly clear should he lose the election.

Trump believes in the power of positive thinking, which may help him come out ahead in a brutal real estate negotiation but proved insufficient in convincing a brutal dictator to denuclearize a peninsula—or spotting a virus from acting like, you know, a virus.

How about systemic racism as it affects policing, should we just shrug and say, "It is what it is"?

But what about the police? Do they need to be on board for any lasting change?

After all, we need them to sign up for a dangerous job, and cops are quitting around the nation left and right. So no more attempting to burn them alive with a Molotov Cocktail as it may not help anything.

Compromise: A bad word in this country.

And what of other issues like the military budget, tax policy, education, and the environment? Health care?

Should the Democrats vote for a Biden proposal to expand Obamacare including the addition of a public option? Yes. Sorry, Bernie bros. It is what it is. We cannot blow this opportunity in some intra-party purity test.

Should we just say that China and India will never stop polluting so we should not fight climate change ourselves?

Hey, the world will be destroyed but "It is what it is"?

What about an eventual war with North Korea? It is what it is? Why not strike a deal with China and let them keep TikTok and in return they can get serious with Pyongyang and tell them the clock is ticking? After all, China's rise is inevitable, and we must pick and choose our battles. Right?

And the market? Will the mania we continued to see this week keep going?

You see, there is one fundamental unreality to the markets. If everyone on Robinhood.com just keeps buying a stock, the stock will just keep going up (I traded options of SPDR Gold Trust, iShares Silver Trust, and UPS this week for a 700% return albeit a monetarily minuscule gain).

Even Jim Cramer, after railing against the idiocy of the rally, finally seemed to make peace with the fact that the market is indeed mad.

"We're not winning the war against the pandemic, and when we're losing, we buy the Cramer Covid-19 Index," Cramer said. "I wish there were more to it than that, but when the virus seems unstoppable, you go back to the well and buy, regardless of valuation."

Regardless of valuation? Yes.

Just buy big tech companies so big their stock's ascension singlehandedly drags the broader index along with them.

Forget valuations? Sure, why not—just so long as everyone else does.

But not only is the market mad; it is dumb. It is not a bull market or a bear market, it is a dumb market.

As Cramer pointed out on CNBC's "Mad Money," days will go by before a news announcement which used to move a stock instantly takes effect. This is what happens when a ceaseless cascade of news is consumed by a ceaseless stream of new "traders" whose stimulus checks have been converted to Bitcoin.

And what about Bitcoin?

Bitcoin, immaterial as it is, will produce tangible results for those who buy in now or hold as investors look to the electronic nonsensical non-currency as they do to gold on a weakening dollar. Buy it. I bought at $11,000 thinking I was late to the party and it is now $11,500 or so after it went up to $11,864 and is probably now up or down 100 or 200 by the time I punctuate this sentence. Bot long term, this stupid thing will likely double in the next few years. This time I am not going to miss the ride, however moronic and risky it might be.

Or you could invest solely in my new Four B's Index: Bullion, Bitcoin, Bezos, and Buffet (but just his massive Apple play). On second thought, make it Five B's and play the Bergman Buy Index as well (Index results posted bi-weekly).

Could you just really invest in this "index" rather unthoughtfully devised and come out a winner? Yes, you could. Or you could buy the Dow. Yes, remember the Dow? A bullish "golden cross" pattern has arisen, say some chart savvy analysts. Great. Just so long as everyone on Robinhood.com reads the same MarketWatch article, I'm all in.