A Reversal of Stock Splitting Philosophy. Plus, Why Kamala Calmed the Markets. 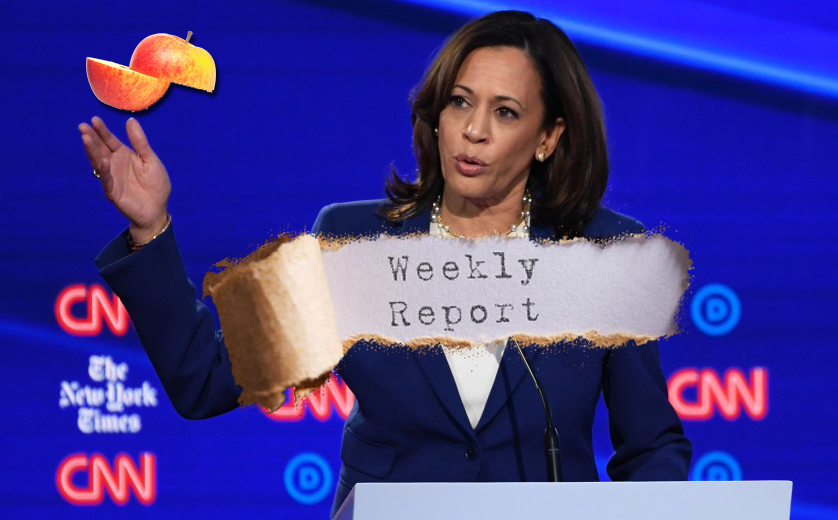 Stock splits do not affect the value of a company. An arithmetical, not alchemic formula, if you have one pen and split it in five you do not suddenly have five pens—or a clean shirt for that matter. Likewise, if a company splits its stock, it just means there are more shares at a lower price; the value remains unchanged.

So why did Apple (AAPL) and now Tesla (TSLA) recently decide to initiate stock splits? And why do some market experts like CNBC's Jim Cramer strongly suggest a slew of other popular stocks do the same? The reason is that as the market has changed, so too has the thinking regarding stock splits.

Back to the Futures

In the early 80s, stock splits were all the rage on Wall Street—like big hair, cocaine, and potbelly pigs. When the SEC banned the practice of fixed brokerage commissions, smaller retail investors could get in the game. With smaller players salivating over big stocks out of their price range, companies whose share price traded high slashed their stock into cheaper slices these new investors could pick up.

In the mid-90s, stock splitting came back into fashion for much the same reason—increased investor access through increased affordability. The birth of the internet spawned online brokerage firms like Charles Schwab, E-Trade, and what eventually became TD Ameritrade. Since 1980, there was an average of 44 stock splits per year according to data from S&P Dow Jones Indices, with 114 splits in 1986 and then 91 per year from 1998 to 2000.

The second stock splitting boom, in the 1990s, went bust when the tech bubble burst. Overvalued tech companies whose split shares brought many new investors suddenly vanished. In the wake of the market collapse, the rise of ETFs and index investing became a less risky, diversified, and affordable alternative way to invest in big, expensive equities. Stock splits fell out of favor. From 2011 to 2019, stock splits within the S&P 1500 index were reduced by 75%.

That is, until now.

Today, novice traders forced inside by a pandemic turn to zero-commission, user-friendly trading apps like Robinhood.com. Afraid of risking their respiratory system but unafraid of dabbling in day-trading, these new traders look to big popular stocks like Tesla and Apple only to find themselves turned off by their respective high share prices. And while investors are now able to buy fractional shares of stock with firms like Fidelity and Charles Schwab—which should make stock-splitting superfluous—it hasn't. This is due in part to the popularity and preference for these trading apps like Robinhood.com, which do not enable such fractional share transactions.

While most of the American stock market is still held by insanely capitalized institutions (unlike, say, the more retail-owned Chinese equities market), this new generation of stay-at-home retail traders has motivated companies with expensive share prices to split their stock to increase accessibility.

And though stock splitting shouldn't result in an increased valuation, the market is only so rational. Even Jim Cramer, who recently not only applauded Apple's and Tesla's stock splits but encouraged other companies to split their stocks this week, reminded investors of this basic mathematical fact.

"Any value in the stock that's created by this [Tesla's stock split] is false," Cramer said. "But I think the idea of getting newer, younger people involved in the stock market who aren't just brainwashed to put money into index funds is terrific."

Now, what does Cramer expect to happen when all these young people he mentioned get into a stock? Well, it should increase in value, right? I thought that was the nature of speculation, the fundamental nature of the stock market itself.

And speaking of speculation: What other than some earnings beats and the Fed's liquidity pump is driving stocks? Certainly not the economy. Certainly not the employment figures. And, certainly not the Russian "vaccine" Putin peddled this week. That drug, while approved, has not begun Phase 3 trials. What constitutes a Phase 3 clinical trial in Russia, you ask? My guess that Putin gives one-half of the Covid-19 patients the vaccine candidate, and the other half the placebo. Then, he gives 20% of both sets of patients a little rat poison— just for fun.

History also has something to say about stock splits, which Mark Hulbert pointed out in a MarketWatch article this week. Hulbert points to a newsletter entitled "2-for-1 Stock Split Newsletter" from editor Neil MacNeale. MacNeale's strategy was to buy a stock that had recently split its shares and hold it for 30 months. As Hulbert writes, "This portfolio was initially so successful that an ETF was created based on it (the Stock Split Index Fund)."

The Stock Split Index Fund was closed in 2017 due to a lack of interest and a dearth of forward stock splits from which to pick. Despite the history lesson on post-split gains, Hulbert questions—at least with respect to Apple's split— if it will yield a higher valuation. He cites the ability of investors to buy fractional shares as a reason for skepticism.

Even when including the impressive acceleration of the bull market under Trump, the U.S. stock market has performed better under Democratic presidencies than Republican ones. Remember the great American bull market began during his predecessor; it began under the apparently scornful eye of Kenyan-born anti-capitalist Islamist Barack Obama. Ironic, I know.

In fact, many reputable analysts and economists feared a Trump win back in 2016, not because he was clearly a golem of American narcissism and poor taste, but because they feared the market would mirror his erratic personality. And they feared trade wars. And yet, Trump's stock market blossomed despite him doubling down on trade wars and tripling down on erraticism.

What gives is that just as the market is divorced from economic reality (as we see literally every week), it is likewise divorced from political leadership—to an extent, anyway. The markets applauded Harris not because she is so market-friendly, but because she, like Biden, is not market-obsessed. She doesn't stew all day about big tech and big pharma stocks like Elizabeth Warren, whose fixation on stocks is equaled only by her fixation on her family tree.

The emergence of Warren as a VP pick would have certainly caused a downward trend in the market, albeit for only a half a day or so of trading immediately following the announcement.

Obama's market went up, but he didn't obsess. In part, because he is not a born braggart and in part because he did not see a booming stock market the primary indicator of overall economic health. He neither loved nor loathed the market, but viewed it with the same agnosticism we should expect from a Biden / Harris presidency.

The Market Mania Is Recent

This view of the markets as the be-all and end-all is a recent, post-Trumpian phenomenon—even on Fox News. To wit, the network relentlessly pointed out during Obama's term that the equities markets had virtually no bearing on the financial health of the economy—or the average American struggling in it. But today is a different story. Now you are more likely to see a scrolling stock market index ticker on the screen during the Fox News "expose" on the coronavirus than you are a graph of rising Covid-19 cases. For the past couple of years, watching Fox News is like watching Bloomberg TV—sans insight.

Caring about the market is good while obsessing about it (unless that is your job) isn't. Trump's obsession with the market above all else has left a nation ravaged by a virus that will, eventually, hurt the markets again as it has the economy. The only thing worse for it would be an equally obsessed, but unseduced, Bernie Sanders or Elizabeth Warren, either of whom would bode badly for investors.

Hopefully, after November, the obsession will be over. Trump can go back to obsessing about himself purely rather than himself as a reflection of stock market performance, and Warren and Sanders' anti-Wall Street rhetoric can continue to fall deafly on the ears of investors.

Neither Biden nor Harris cares much about Wall Street. And that's good enough for people in the markets and, more importantly, even better for everyone else.