Five Dating App Stocks You Might Fall in Love With

High demand for dating app operators is likely to continue even after the pademic. 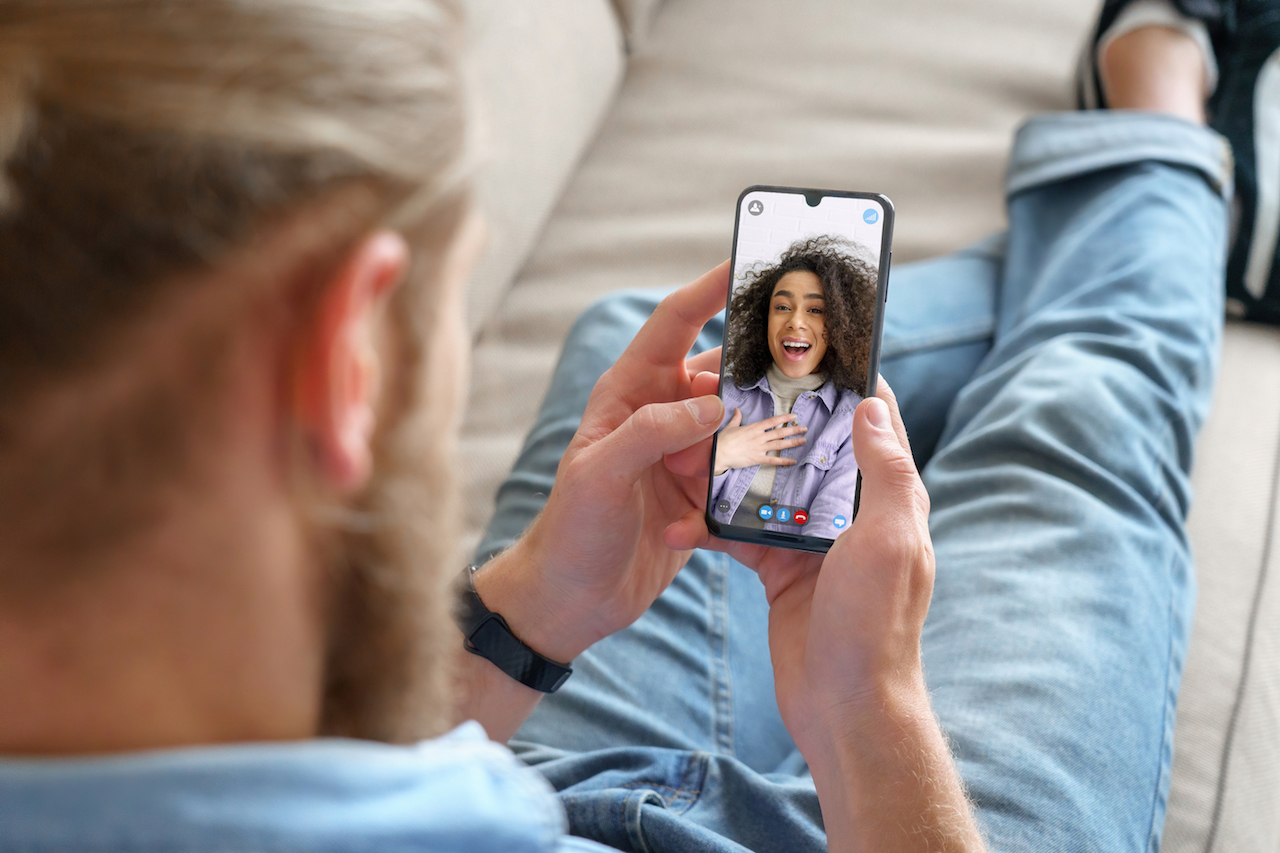 Dating apps have been booming for years fueled by efficiency, convenience, and the fact that so many love seekers now do not have to brave approaching a stranger in a bar only to be turned down, their ego crushed. Being swiped left on is a lot better than buying someone a couple of drinks only to walk out with a fake number.

Addictive by nature, dating apps have unsurprisingly exploded during the pandemic. With bars and restaurants closed, a virtual date was about as good as it got during the height of the virus' spread. They used to say there was only safer sex, not "safe" sex. Well, it doesn't quite get any safer than copulating via zoom.

According to market researcher Statista, which cited a survey of 131 people that were 18 or older in April in the United States, 31% of respondents said they were using online dating apps or services "somewhat more" before the pandemic. Just 13% of the respondents were using virtual dating platforms "much less," according to the research.

Dating apps did not disappoint in their latest financial reports. But can they keep up post-pandemic?

Swipe Right on Match Even at an All-Time High

By far the largest publicly traded dating app operator in terms of market capitalization is Match Group, Inc. (Nasdaq: MTCH). And to nobody's surprise, Match, which operates popular dating platforms including Tinder, Match.com, OkCupid, and PlentyOfFish, has witnessed an astronomical increase in demand.

But even long before the pandemic, Match's dating platforms have been dominating the space. The only dating app, not operated by Match, that has even come close to Tinder in terms of users is privately held Bumble. According to a separate report from Statista, Tinder's mobile U.S. audience hit 7.86 million versus Bumble's 5.03 million, as of September 2019. 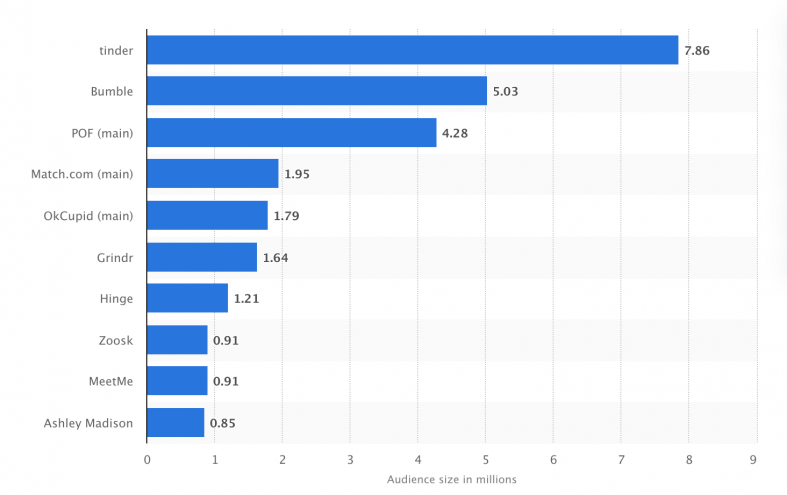 The dating apps are both similar in a sense that they both offer a system that matches users only if they've swiped right on each other. The biggest difference is who can message first. Under Bumble, females are given the power to send the first message and dictate the conversation. The same restriction to men doesn't apply to Tinder, as anyone can message first.

In the second quarter, Tinder gained roughly 200,000 users, bringing its average subscribers to 6.2 million. Also, direct revenue for Tinder also jumped by 15%. In total, Match's revenue soared 12% year-over-year to $555.5 million on earnings of $103.1 million, or 51 cents a share. The results easily beat estimates of $520 million in revenues and earnings of 45 cents a share.

Benjamin Black, an analyst at the advisory firm Evercore ISI credited Match's video features that kept users engaged on its platforms amid the early stages of the pandemic.

"It's an important aspect right now to keep folks tethered to the brand," he said.

Match is now projecting to generate third-quarter revenues of at least $600 million, which was above the analysts' projections of around $575 million, according to Refinitiv IBES data.

"That momentum from Q2 really is going to carry into Q3 for us and we are optimistic it is going to carry beyond that," Match Group's chief financial officer and chief operating officer Gary Swidler said on CNBC's Squawk Alley.

Thanks to the strong earnings, the stock is now trading at an all-time high since it debuted on Nasdaq in November 2015. I would feel comfortable buying the Dallas-based company at $115; Match should continue to see high demand during Covid-19. Too bad Bumble doesn't publicly trade, because it just recently surpassed a milestone of 100 million users. In an interview with Bloomberg from October 2018, Bumble's founder Andrey Andreev was considering a Nasdaq listing and said "We're now in very deep discussions with banks." That will be an IPO to watch.

Another dating platform operator seeing demand surge is small-cap The Meet Group, Inc. (Nasdaq: MEET). While the attraction it gets is nothing compared to Match, the stock is certainly one to watch for sure.

Meet Likely to be Acquired by the End of the Year

Despite the strong results, it has failed to earn much appreciation in the stock market since posting its financials. The company opted not to provide guidance or host a second-quarter conference call because of its pending agreement to be acquired by the German media group ProSiebenSat.1 Media SE (OTC: PBSFF) and private equity firm General Atlantic's joint company NuCom Group.

Meet, which operates social media networking platforms including MeetMe, hi 5 and LOVOO, said the acquisition was an all-cash deal worth $500 million in March with cash consideration to its stockholders at $6.30 per share. CEO Geoff Cook said in the company's earnings report earlier this month that he expects the deal to wrap up by year's end.

"We have received antitrust clearance in the United States, Germany, and Austria, and our stockholders have approved the transaction," he said.

Is the stock a buy? No, but investors should feel comfortable holding Meet. Shares of Meet are up 24% YTD, as the company's market cap sits at around $455 million.

On the international online dating stage, one company likely to continue seeing demand is Spark Networks SE (NYSE: LOV). While German-based Spark has been a big winner since late July, Spark struggled after pandemic triggered sell-offs in February and March; the panic sent its stock down to trading in the range of $2 and $3 per share

But now things have taken a sparkling turn for the company which operates Zoosk, EliteSingles, Jdate, Christian Mingle, and eDarling. Based on preliminary financial results, Spark generated $114 million in revenue, beating its previous expectations of between $110 and $112 million.

It also raised its full-year guidance; Spark now expects revenue in the fiscal year 2020 to be in the range of $224 to $228 million, up from between the $212 and $220 million it previously guided for.

While this stock should continue to Spark, the company uses an old-school approach in attracting its customer base. Spark focuses on religious dating and users that have serious relationship goals. Before buying, I would wait for the stock to fall to around $5 per share. You don't want to marry this stock just yet.

Newly Listed Chinese Unicorn BlueCity Might be Worth Some Love

Yes, there are Chinese firms that publicly trade on Wall Street too. The two firms are BlueCity Holdings (Nasdaq: BLCT) and Momo Inc. (Nasdaq: MOMO). However, both firms are completely opposite in not only their distinct offerings, but in terms of financial performance as well.

Starting with Momo, also known as the Tinder of China, failed to impress investors after reporting its first-quarter financials in late May. After all, the results were mostly negative for the Chinese social networking platform. In the quarter, its revenues slipped 4% year-over-year to $507.6 million. It also reported its monthly active users declined to 108 million, down 6.4 million from the same period last year.

In addition, the outlook Momo provided won't make shareholders feel much better. In the second quarter, Momo anticipates generating revenue in the range of 3.8 billion yuan to 3.9 billion yuan ($550 million), representing a decrease of between 6% and 9% from the same period in the previous year.

As for BlueCity, it's been an exciting last month or so for the LGBTQ+ dating app firm, which was just recently welcomed to Wall Street. The excitement was justified, as the Chinese unicorn's stock skyrocketed as high as 124% in its trading debut from its IPO pricing of $16 per American depositary share. While the stock has lost some ground since, Loop Capital Markets initiated coverage on BlueCity last week, issuing a "buy" with a price target of $20 per share.

In justifying the buy, Loop Capital's director of research Laura Champine wrote, "As Asian societies gradually become more open to the LGBT community, we expect more community members to reach out to their peers digitally."

She continued "The Blued app has more experience and more members than any other sizeable LGBTQ platform in Asia, and management knows how to make its users feel safe and connected. We believe the app's rapid growth outside of China demonstrates the company's ability to navigate in the fastest growing markets in Asia, including India, Vietnam, Thailand, and Korea."

The company's app Blued is the largest LGBTQ community in China, India, Korea, Thailand, and Vietnam. It has users in more than 210 countries and regions. On IPO day early last month, Ben Li the chief financial officer of BlueCity told CapitalWatch in a phone interview that the "U.S. is a very compelling market, but we are still at an early stage in exploring it."

He added, "Because our current users have similar social, entertainment and health-related interests across regions, we can leverage our branding, product expertise and user insights to help us scale globally."

It would, of course, face competition with California-headquartered Grindr in the U.S., which claims to be the world's largest social platform for "gay, bi, trans and queer people."

While you should avoid Momo at the moment—you won't want to miss BlueCity's earnings when the company posts them Aug. 26.

Match CFO Says Video-Dating is "The Next Best Thing"

As the world looks for its first effective and safe vaccine, video-chatting might be a game-changer for daring apps. In an appearance on CNBC's Squawk Alley earlier this month, Match's CFO and COO Gary Swidler said in regards to meeting people that "doing it online doing it by video is the next best thing."

Further, he noted, "I think it's working out very well for people and I think people will continue to use it even when the pandemic passes."

But the video-chatting segment is still in early stages, as Match is looking to add features like games and icebreakers to make face-to-face calls more engaging, and less awkward.

According to Statista, revenue in the online dating sector is forecasted to hit $1,754 million in 2020. From 2020-2024, revenue is expected to grow at a compound annual growth rate of 9%.

If you thought that our lives changed when online dating started to become the norm—it has now reached an entirely new level thanks to Covid-19. Until the FDA swipes right on a vaccine, the future of dating will be virtual.