Trump has called for us to forgo our iPhones, social media apps, Amazon delivery, and top clothing brands. Now he's mad at tires. 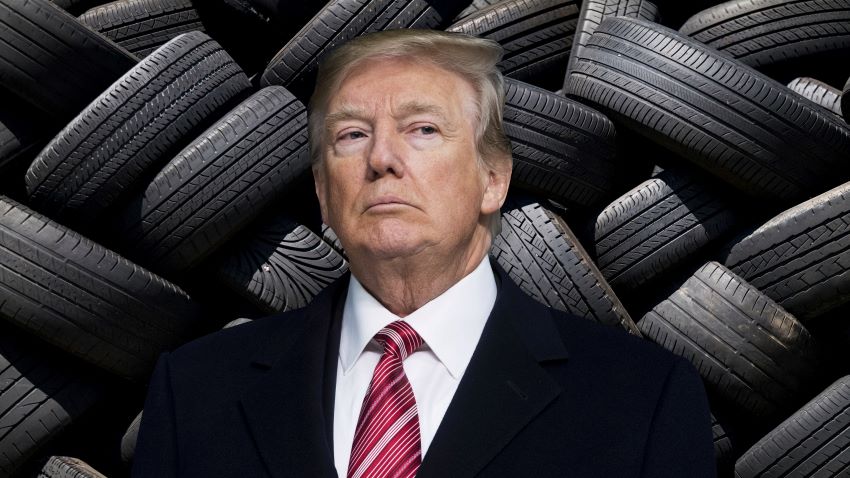 If investors in Goodyear Tire & Rubber Co. (Nasdaq: GT) ever considered the tire stock apolitical, they were wrong. Shares in GT dipped 4% on Wednesday afternoon after President Trump called to boycott the company.

The tweet spurred a slew of pro-Goodyear replies, as well as a video showing the burning of a MAGA hat by an African American crowd to the sound of K9's track "Phantom Gods."

One commentator, multimedia journalist David Leavitt, wrote: "Goodyear Tires are made in Ohio. MAGA hats are made in China. Trump doesn't care about American products or workers." 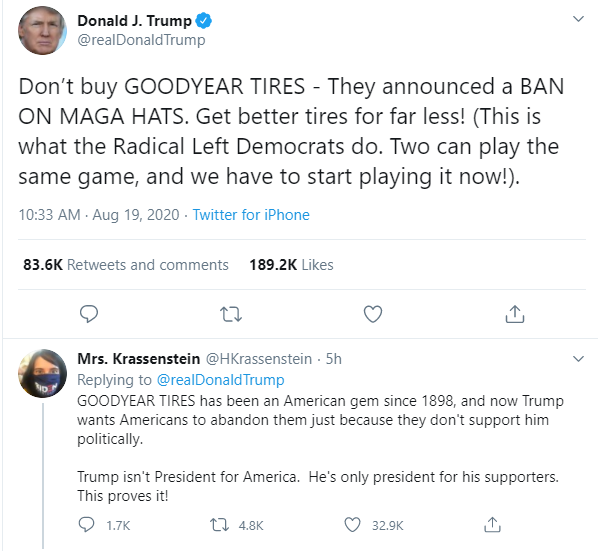 Another user wrote: "I just removed my tires and replaced them with cans of Goya Beans because I am a real patriot." Her tweet, posted under the nickname "JenzoBeans," takes back to the July boycott of Goya Foods after its CEO, Robert Unanue, praised the president at the White House Rose Garden.

"We are all truly blessed ... to have a leader like President Trump who is a builder," Unanue said during his speech. The public's response was #Goyaway: Trump is known for his anti-Latino slurs and anti-Mexican actions and Goya Foods – as the largest Hispanic company in the United States – demonstrated it was on the wrong side of the spectrum in this clash. However, the boycott didn't seem to be productive, as Americans are stocking up their pantries amid the ongoing social isolation.

So, on this note, let's take a look at – at least a few of – the companies boycotted by Trump to see how they have coped with such an obstacle.

Facebook, Apple, AT&T, Boeing, Merck, Nordstrom, Macy's, Amazon, just to name a few of businesses Trump had turned against at some point. Not to mention that he blasted Twitter on Twitter.

Obviously, the boycott on Apple (AAPL), which Trump launched in 2016 after the smartphone giant refused access to an iPhone of a San Bernardino shooter, could not heavily affect its sales. Apple lovers love their iPhones, while Android users pretend to love their Samsungs. AAPL stock has more than quadrupled since 2016 and today it became the first U.S. public company to reach a $2 trillion market cap.

Amazon's sales and stock (AMZN) were likewise left unfazed – at least, noticeably, – though some angry customers were reported to boycott the online retailer in 2017 due to Bezos' "anti-Trump agenda."

Nordstrom (NYSE: JWN) and Macy's (NYSE: M), meanwhile, are smaller stocks – trading today at $15.40 and $6.52 per share. Donald Trump boycotted the former in February 2017 when it decided to stop selling Ivanka's brand – a decision Nordstrom explained by the declining sales. Macy's dumped Trump's men's collection back in 2015 and in 2016 reiterated its stance.

Trump had also called for a boycott on Macy's days after he urged a boycott on Starbucks (Nasdaq: SBUX) when it was $77.63 per share. In late July, SBUX peaked at just under $100 per share, suggesting a rebound to those heights. This company has repeatedly come under Trump-supporters' wrath, but lately, the coffee giant is dealing with a boycott not associated with Trump after it banned "Black Lives Matter" slogans on baristas' attire. Now, activist young coffee drinkers will turn to Blue Bottle Coffee, at least in those cities where its stores are just as abundant as Starbucks'.

Facebook, then. USA Today wrote last month that hundreds of brands will leave Facebook (Nasdaq: FB) over its failure to stop hate speech, but it won't be enough to drive the social medium to change. These brands "make up a small percentage of the company's revenue and they are pulling ad dollars at a time when many had already dialed back spending," wrote USA Today.

The Stop Hate for Profit boycott temporarily weighed on FB shares, the stock bounced back quickly, trading today at $262.59 per share, up to $30 from July lows. And apparently, Trump is the source of much of that hate speech – and has attacked Facebook for censorship.

Goodyear slipped as low as $9.32 per share in the afternoon Wednesday but ended the day at $9.50 per share, down 2%. GT has actually been on a jagged recovery from its drop to $4.57 per share of mid-March. Whether ardent Trumpists will turn to other brands on Trump's instruction remains to be seen. The next earnings report will no doubt shed some light.

The autumn is traditionally a good season for new tires. And also new presidents.