On the Road Again. As Americans Move, So Will These Stocks. 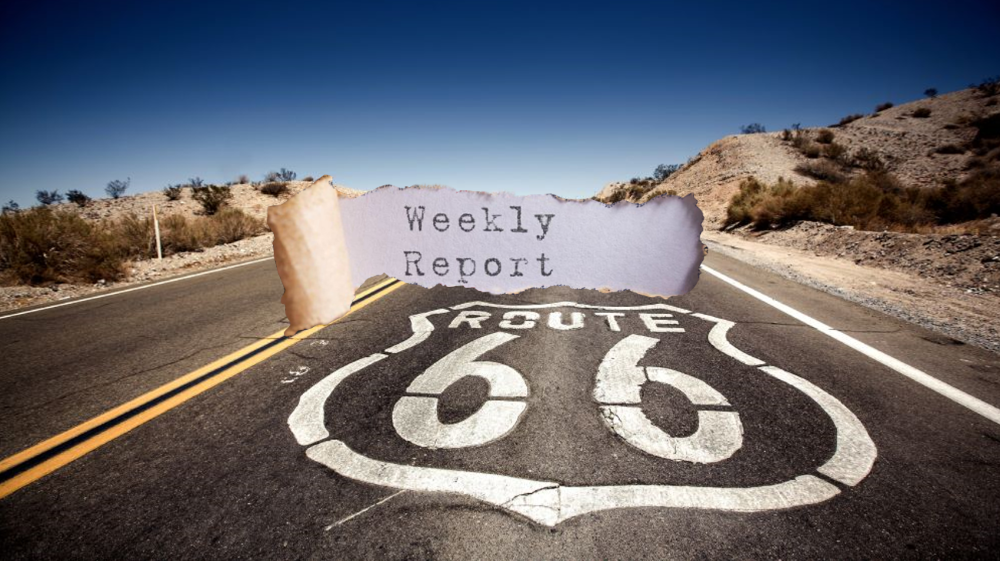 "All he needed was a wheel in his hand and four on the road."

There is nothing more quintessentially American than the open road— baseball, barbecue, systemic racism all tie for a close second. From Steinbeck to Springsteen, the image of a man (or a woman) heading out on the highway in search of survival, adventure, or self-discovery is such distinctly American iconography it borders on parody.

Indeed, the story of America is the story of movement. Movement to the nation (both voluntary and involuntary), and movement within the nation. Millions moved from east to west and south to north, only to later move in opposite directions. We went from crowded cities to suburbs and back to cities.

And then America suddenly stood still.

From the end of World War II to the mid-60s, one-fifth of Americans changed residences every year. The postwar era of unprecedented economic expansion and consumption coupled with housing programs like the G.I. Bill led millions to venture out on President Eisenhower's vast Interstate network. They headed out in search of better jobs, better houses, and better neighborhoods—or just a change of scenery.

Slowly, like the highways and bridges themselves, American mobility, both economically upwards and geographically outwards, began to decline. America, once the crowned king of upward mobility, now lags many nations.

There are several ways to track upward mobility. A common way is to compare parental earnings to their children's. According to the Brookings Institute, "about 50 percent of parental earnings advantages are passed onto children." In Canada, Norway, Finland, and Denmark, that number drops to 20%. What does this mean? The data implies a stark difference: It will take an average of three generations to negate the effects of being born into wealth in those countries, while it will take six generations to negate the effect of being born into wealth in the U.S. In other words, in Scandinavia, after three generations, the advantages of being born into a rich family are removed, while it will take double the amount of time for America to level the playing field.

Countries like Germany, France, and Switzerland fall somewhere in the middle. This European upward mobility is not reflected in geographical movement, however. Judging Germany's economic expansion by a number of Germans driving Mercedes-brand moving trucks on the Autobahn is inadequate and misleading. But in America, economic and geographical dynamism have historically traveled in tandem.

Decades of stagnant wages have resulted in decades of geographical stagnation. With both parents having to work to survive, relocating meant that two persons rather than one would have to secure new employment. Add to this an aging population and the emergence of more economic regional bubbles (think Silicon Valley), and by the late 90s only 15% of Americans moved each year. (Yet my mother moved me to three highs schools in four years due to a combination of an Army brat childhood-related pathology and the need to secure better employment).

By the 2000s, that number fell to 13%. After the Great Recession in 2008, it fell even more sharply, a decline that continued even after the recovery. Americans, especially younger ones, were often priced out of homes in areas where they could find work. Millennials ended up in their mom's basement not because of helicopter parenting, but because of economic forces and housing costs that made life more expensive than it had been for previous generations. By 2019, fewer than 10% of Americans changed their residence in a single year, the lowest rate since the Census Bureau began recording these data.

But the virus has changed all that. America is once again on the move—this time to the woods. And it will send moving stocks like U-Haul, recreational vehicle stocks like Thor and Winnebago, and housing ETFs like Homebuilders on a path to new heights.

If You Can Make It Anywhere, Why Struggle to Make It Here?

New York City, where I live, is dead and Covid-19 killed it. At least, so says another beaten-down New York writer on a daily basis. This thesis is supported through a surplus of anecdotal evidence; every New Yorker knows someone who has moved to the country permanently over the course of this pandemic. While technology may contribute to sedentarism, it should also contribute to increased geographical relocation. 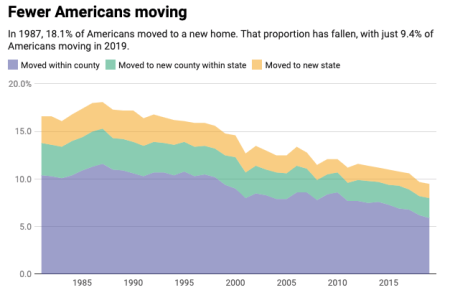 Most white-collar jobs can be done entirely from home. Most of us already knew this, but it took Covid-19 to bring about the widespread employer acceptance of telecommuting as a perfectly viable alternative to the office environment.

After decades of staying put, around 20% of U.S. adults say they have either changed their residence or know someone who has since the start of the pandemic, according to a recent Pew Research study.  Enabled by tech, new ex-city slickers are skipping the suburbs and heading to the country. Whether New York will rebound as it did after 9/11 when it experienced a similar exodus remains to be seen. But as the leaves fall, the cases will rise. And more people will use this opportunity to lock in a mortgage on a cheap country home at these embarrassingly low-interest rates. Last month, the average rate on a 30-year fixed mortgage fell to 2.98%, the lowest level in almost 50 years.

U-HAUL Has Moved Up, With More Room to Grow

Founded in 1945, U-Haul is the industry leader in do-it-yourself moving and self-storage with more than 22,000 locations across the U.S. and Canada. The company also offers self-storage units in all 50 States and 10 Canadian provinces. Trading on Nasdaq under the symbol UHAL. Amerco, U-Haul's parent company, has seen its shares rise from $246 per share in late March to $358 per share, only to scale back a bit to a current level of around $353 per share. While the stock is now closing in on its pre-virus 2020 January high of $386, I think at this level UHAL is a buy. I see this stock surpassing $400 per share by the autumn. A slow mover, this mostly unpublicized stock will continue to move upwards, albeit over hills and valleys, for the next six to 12 months and beyond. In the next decade, a massive migration unlike this nation has experienced in a half-century is imminent, a migration that will dramatically redraw the American demographic map. The only self-mover game in town, U-Haul will have a monopoly on the ensuing exodus.

I Almost Bought an RV

To live in permanently. I still might. Just not sure to what degree I am willing to give up on life. Do I really want to live in a campground? I don't know. Maybe I'll move it to East Midtown, the abandoned wasteland in the center of Manhattan. Or maybe the Upper West Side, where formerly homeless hotel guests wander the streets unmasked, but certainly not unfazed.

I am bullish on RV stocks long-term, but shares of RV players like Winnebago Industries, Inc. (NYSE: WGO) and Thor (NYSE: THO) have accelerated to the point of overvaluation. Of the two, I like WGO a bit more at these levels but would not rush to buy either. A better play, especially shorter-term is LCI Industries (NYSE: LCII). The company released earnings two weeks ago, posting sales of $525.8 million in the second quarter, a decrease of 16% year-over-year. Yet April was almost entirely shut down; the company had the best June and July sales on record. While the company manufactures RVs, it focuses on all the equipment one would need to spend (or waste) life on the road: toolboxes, truck caps, running boards, side-outs, mattresses, alignment systems, shock absorber, power stabilizer jacks, baggage doors, and sliders.

Running boards? This all seems like a lot of work for someone superbly unhandy like me. Call me sedentary, but I think I'll buy a house that doesn't move (hopefully) instead.

While I was about two weeks premature calling the bottom, on March 13, I recommended three housing plays as safe buys that will eventually turn around. I expected a far longer road to share price recovery, but even at these levels I am still bullish long-term on these homebuilding trades:

Housing sales were up in July and construction sentiment is high.

The National Association of Home Builders/Wells Fargo Housing Market Index (which measures builder confidence in the newly built, single-family home market) is now at 78 points, the highest level since this the creation monthly measurement 35 years ago. Over 50 points is widely viewed as proof of positive sentiment.

Considering the larger migratory trend belabored in this article and mortgage rates at record lows, I see the above ETFs still worthwhile long-term investments.

Real-Estate Investment Trusts (REITs) are a good way to bet on the longer-term trend towards stay-at-home work. REITs that are centered on office space have been unsurprisingly hammered. The trend towards working from home is permanent, and businesses that focus on renting office space may never get back to where they were pre-coronavirus. I just say stay away from office REITs generally. But Boston Properties, Inc. (NYSE: BXP) is a buy long-term—if it falls. I would wait until it falls under $75 (now at $85) to pick it up.

But my favorite REIT is Healthpeak Properties (PEAK). This 5.4% dividend yield stock caters to biotech offices, outpatient clinics, and nursing home facilities. The company has $2.8 billion in liquidity, and while the nursing home segment suffered due to Covid-19, the rest of the business made up for that lost ground.

The fact is that people will be back in the nursing home before they return to the office. And that goes for me too. Because I just changed my mind. Time to pack up and head out on the open road in an RV.  I just need to get these damned truck caps on and these side-outs … in?