Despite the uncertainty in California, one analyst is still very bullish on the ride-sharing stocks. 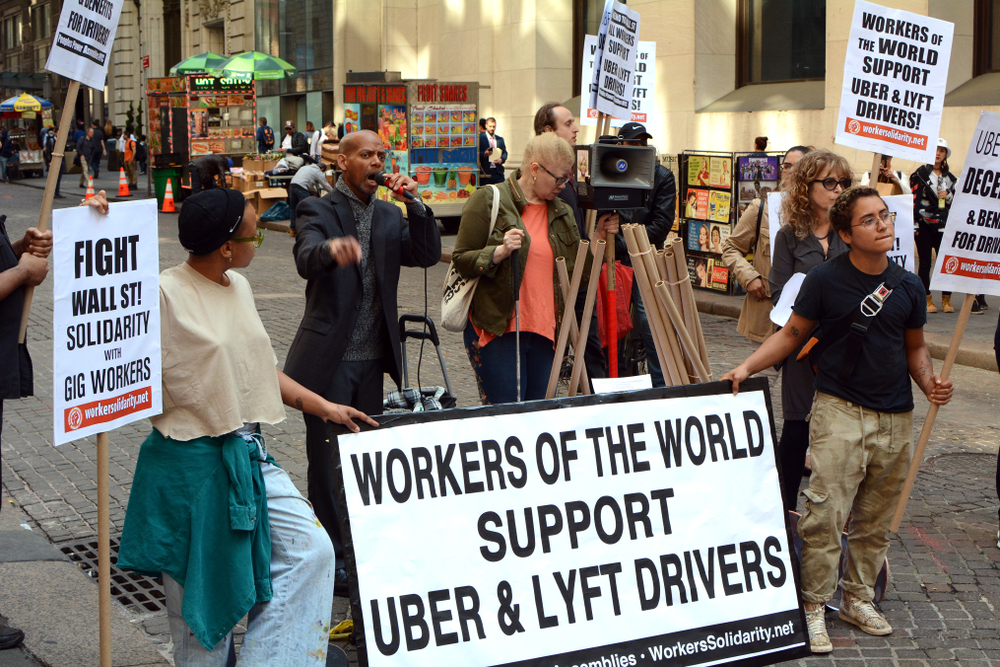 A last-minute legal intervention on Aug. 20 enabled both ride-hailing giants to continue operating in the golden state. This court order granted Uber and Lyft more time to comply with a judge's ruling that ordered the companies to classify its drivers as employees, not independent contractors.

The idea of Uber and Lyft - two of the most anticipated tech companies to go public in the past few years - ending its business in the largest state would have sent shockwaves across Wall Street.

Investors don't have to fear that Uber and Lyft would actually leave California, but both companies could be forced to completely change business models if its drivers gained employee status.

Uber and Lyft have spent the past year trying to gain an exemption from the law for its drivers, but have recently been denied that exemption.

Brad Erickson, a senior analyst with Needham, told CapitalWatch that the authors of the AB5 bill had a "political agenda targeting these companies."

"These lawmakers have and continue to demonstrate that they do not understand the basic economics and the leverage points of what is happening within this new and emerging free enterprise," Erickson said.

While proponents of AB5 argue that Uber and Lyft are withholding benefits and legal rights from its drivers, critics say that drivers currently enjoy the freedom of their independent status.

Erickson added, "These drivers have access to certain benefits working for these companies - i.e. flexibility, not being able to get fired, come and go when you please - that normal employees don't have at all."

A survey released by Uber this week found that 82% of its drivers support a plan proposed by CEO Dara Khosrowshahi which enables drivers to maintain their independent status while getting access to some benefits.

This is far from the only poll that suggests drivers don't support the change, even though they had aggressively advocated support for AB5 in the past.

A 2019 study from the University of California Hastings College of the Law found that there is actually a degree of mixed feelings from drivers surveyed on this issue.

In an interview on CNBC last week, California Attorney General Xavier Becerra said that workers should get their benefits and maintain their flexibility under California employment law.

The argument that drivers would be better off with benefits is one that Erickson understands; however, he expressed concern about how that works "in the context of the industry that the free enterprise has produced here."

"It's going to totally shatter the industry, reduce opportunities for employment, and it'll create a whole other set of negative byproducts," Erikson said.

Asked in the CNBC interview about why ride-sharing companies are not exempt from AB5 like other industries, Becerra replied, "Show me these execs at Uber and Lyft and show me where they live and what kind of car they drive and how they travel around the world."

Becerra said this case differed from other small businesses that got exemptions.

Erickson commented: "I'm sorry, are we talking about AB5 or are we just going after rich people right now?"

Some Uber and Lyft executives, such as former Expedia Group CEO Khosrowshahi, made their wealth before joining their companies.

Erickson added: "Indicting him for being wealthy is utterly ridiculous in that context."

In November, Californians will vote on a ballot initiative known as Proposition 22. If voters approve of the proposition, Uber and Lyft would be exempt from AB5.

"We're applying the logic that Proposition 22 will be successful given that there have been a handful of both third- and first-party studies suggesting that the significant majority of drivers understand, value the flexibility, and recognize that there are certain aspects of full-time employment that they give up because they have that kind of flexibility to work as a contractor under these models," Erickson said.

Advocacy groups led by Uber and Lyft have raised more than $100 million to campaign for the proposition's passage.

Failure to pass Proposition 22 would, as Erickson said, be California voters telling drivers "that they don't care about them."

If the proposition fails, Uber and Lyft would be forced to move to an employment model.

"Hundreds of thousands of people in California who rely on these services to pay their bills or use them as a supplemental income source, won't have a job," Erickson said.

An economist working for Uber says that 76% of California drivers would lose their jobs if their independent contractor status was eliminated, but this is just an estimate and it has been widely disputed.

Erickson added that another 10% of drivers would have to choose between working full-time for Uber or Lyft, or quit their existing jobs.

So, What Does This Mean for Investors?

Despite the uncertainty in California, Erickson is still very bullish on the ride-sharing stocks.

"Uber is one of the very small handfuls of stocks where we'd call it a mega-cap value creation opportunity over the much longer term," Erickson said.

He also said investors could make money with Lyft: "I'm positive on both of them, understanding that we're in this period where there may be a persistent overhang because of this regulation."

Being pessimistic about Uber and Lyft and agreeing with the regulators is, as Erickson put it, is "betting against capitalism in this country."

While there are other startups in the ride-sharing space, it is unlikely that they could ever challenge Uber and Lyft in the current environment because the barriers to entry are extremely high.

"People seem to think that there are these little mom and pop startups out there that would love to come in," Erickson said. "But they would be dealing with exactly the same hurdles that Uber and Lyft are dealing with."

It turns out that the regulations against Uber and Lyft could actually strengthen the companies. Most venture capitalists avoid industries with major regulatory hurdles, maintaining the dominance that Uber and Lyft have in the sector.

Erickson said: "They're the only two companies that have the staying power, the resources, the platform, the engineering, and the infrastructure to actually withstand this and move through it in the end."